A downloadable Metroidvania for Windows

A dark and arid hellscape inspired by the likes of Metroid Prime and Dark Souls, Vomitoreum is an FPS Metroidvania set in an interconnected and nightmarish world.

Explore a land that has been plagued with an eldritch infection, a horrible fog that blankets the world and turns it’s denizens into wretched mutants. Delve deep into the ruins of this plagued world and find a cure for this horrid blight.

You are the Nephilem, a vessel born of cosmic ash and the churning souls trapped within graves. Created as a being able to survive the hellish environment and search for a way to make the fog recede, you will scour the lands in search of tools and weaponry that will be useful on your journey.

The Nephilem’s end goal is to make the infection and the fog recede, destroy the horrible demons plaguing the land, and let life flourish once again.

Vomitoreum has a world inspired by the painting of Zdzisław Beksiński; intense combat; challenging but fair gameplay; and a world waiting to be explored! Rise from the grave factory and see what Vomitoreum has lying in wait for you!

I would've backed if there was an alternative to avoid Kickstarter like Indiegogo or a way to pre-order. Let me know if there is :) Otherwise i'll wait for the full release this looks awesome.

There are a lot of things to like about this game. I look forward to what it can become. The art (a unique mix of Beksinski+Iron Maiden album covers+John Carpenter monsters), the music/sound, and the story are great.  I have a few issues but understand this is far from a finished product. The issues I have seem to influence each other. The combat is very easy  because of the openness of the environment, depth of perception, and the limitless range and ammo of weapons. In the opening credits, a fog is referenced (but not utilized in the demo) which could isolate the player adding some difficulty by hiding his enemies and dismissing the weapon range. There must be a balance otherwise you couldn't enjoy the river of flesh coming from that Wall Mouth. There's a need to build more like in the fungal marshland which is too barren. If the world is getting enveloped by this plague again maybe the sky gets cloudy and darker. The skiddish nature of certain enemies change them into more a comical nuisance than a threat, (Tall Knight and lower Grunts). Some creatures and areas look better than others , I'm hoping they all get a little more polish, definition, and variety. I do enjoy what we have and I'll keep playing with different strategies and see if my issues change.

I really enjoyed playing this! The controls were smooth and reliable, everything was easy to come to grips with and the graphics were really cool! Great job!

Reply
The Fringe6 days ago

This game is fantasic, really looking forward to seeing how this develops, I would love to see some NPC's and make this almost RPG like with the free roam vibe, Really love the idea though

Very much looking forward to the full game!

im stuck on the mushroom area, just got the sprint thing, where do I go now?

ya can get some extra's but you need to go to the muschroom fields with death pits, there's an jump you can't make without the dash.

This game grabbed my attention quick, I've got a lot of love, and parkouring rage for this game, can't wait for the full game, gonna be playing as much as I can.

I really like what you've done here, and although I can't donate myself I hope you reach your goal

I suggest that each playthrough  will have a different obstacles, items, and enemy placement, number and types (not necessarily procedural generation) for allowing to replay the game

Nice game, it reminds me of Doom and Quake 3 arena.

Brooo.... this is the fkn game of my dreams. Was so fun but hurt so much because I always wanted to make a game like this.

As someone who played Doom 1 & 2, Quake as a little kid, then fell back in love with gaming because of Dark Souls, this game is a beautiful combination of the two.

I think this game has potential to become a massive hit if you keep up the great work and let nothing stop you. It already is in my eyes.

this art style is pretty cool!

I LOVE THIS GAME

really awesome game! had a lot of fun playing it and am looking forward to seeing how yall expand upon it! Check out my DOPE video to see my experience! EDIT: people are really loving the art style of this game! I think yall have a really good thing going here. I hope to see a finished and expanded product soon! 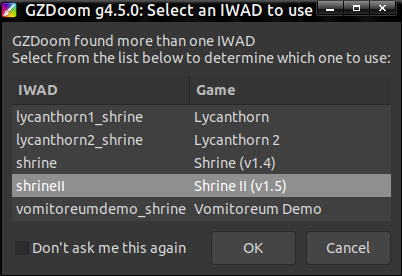 Game looks dope, art direction is super good. Definitely this game's selling point. Hope you guys can expand upon this on a full game.

Exploring is fun but often halted by platforming above insta-kill pits. Saw on twitter that this is getting fixed, which is great.

Gameplay-wise, it gets a little complicated for me. It still is very much Doom, and I find it a bit problematic for the platforming sections: it feels uncontrollable because of the huge inertia.
This often ends up in slipping off of platforms, not accelerating fast enough and screwing up your jumps, etc...

The dash is not great either in this regard: it's much too uncontrollable to do platforming with precision.

Combat-wise, I'm not convinced either. All ennemies are same-ish, they mostly walk towards you while shooting, which is a shame since they are visually interesting, and all differenciable. Compared to, say, DOOM II's ennemy variety, it's a bit underwhelming.

It doesn't help that the best strat is to run in a circle around them and shoot, which is easy since most fights take place in very open areas.
Works for bosses too !

Furthermore, ennemies deal very little damage (exept for the sniper bois (that die in a single hit)). All of this ends up in very easy fights. I never had any trouble through the whole demo.

Guns, by the way, look cool but feel underpowered. The pistol induces carpal tunnel syndrome with the number of shots it takes to kill a single ennemy, the shotgun is underwhelming but still useful, and the secret weapon looked promising but I got it right before finishing the demo, so I couldn't really try it.

And lastly, the most important question: was it fun ?
Yes, yes it was ! So that's a good start. But there's plenty of things that could be done better.

My feelings about the game end here. Now for a list of potential changes:

Of course, this feedback comes from some random schmuck on the internet, so I encourage you to try the game out for yourself

Hope the devs end up making a great game out of this !

Played your demo for my channel and ended up falling in love and backing the Kickstarter. You really hit a sweet spot between the three types of games and I'm psyched to play the full release.

Reply
Neco The Sergal15 days ago

Gave it a little Let's Play, curious of the Metroidvania, I grew up with Metroid games and can hardly say no to Metroidvania

To me it has a really good Doom feeling but the monsters are more metroid like. Cindy and moving around felt natural but I couldn't crouch though the is a crouching option. Wonderful game

This is game is amazing-. I like the "oldskool" look! I'm excited to see what comes!

Only thing I hate is the save system! (My skills are crap in jump events and I die a lot :D )

excited to see what comes of this

Your games get better every single time-  No Commentary

Great game demo, It was pretty fun and exploring was pretty rewarding, the only issues I had with the game were the slippery ground and the extremely unreliable double jump that doesn't work 75% of the time.

I got 100% Items, 100% secrets and 97% kills, I think the other 3% were the monsters inside the little crawlspace in which I can't kill anything.

I've been playing the game and wanted to share the video I've made to give you some feedback that hopefully ends up being useful for the development :)

-The main concept and game mechanics work very well and feel quite polished.

-Visual style is quite good and "eye catching", very unique when you take a look at some places on the game.

-Guns feel good and the sound design fits the game.

-It could be good to have more control while jumping, to feel platforming more smoother.

-In general the game is quite good and polished and I really enjoyed trying it out :D

Demo was a lot of fun, great work so far. I also adore the art style and general aesthetic. Only major issue I ran into is that entering morph ball and then exiting sometimes reset my health to 99 even if the max health was above that.

Impressive game. Can't wait for the next updates.

I really like this demo! It's great to just stop and look at. I always love seeing non-combative AI , it makes the world more alive. Beside the mini-boss softlock (which you said you're fixing so, cool) I would say it would be nice to hold down the mouse button to keep firing. It doesn't have to be fast, but just enough to were you don't have to continuously click so much. I appreciate the Linux version! I look forward to seeing the full thing!

very good doom like game. I love it. I hope to see full release one day. keep it up.

btw if you are interested, here is video of your game:

Just finished it (two different ways, the dash is super abuseable) and despite encountering softlocks at both miniboss and full boss chambers I had a blast. Wonderfully thematic. The enemy design is ridiculously grotesque and the way they enliven the twisted horror of what is clearly ruined cities that have been rebuilt and redestroyed and further twisted is almost anguishing in its melancholy. The game's aesthetics put me in mind of the design of the enemies and areas of "the future" time period in Chrono Trigger, set after the cataclysm. Everything is mutated and decaying and putrid and sodden with despair. I love it!

I look forward to the continuing development of the game. Good stuff!

Both softlocks are gonna be fixed today! I'm glad you enjoyed dude! C:>

Hello, I played this game and I really enjoyed it, although it took me ages to understand how to use the 'shift' ability but over all it was a neat game, the sound effects were cool, and the environments were very fun to explore, good work :)

never though a doom-like Metroidvania could work so well, really enjoyed exploring and finding new abilities. Being a huge fan of Beksinski and Giger, the aesthetics were really cool. The deep lore is super intriguing

Not a fan of the platforming sections, resorted to quicksaving a lot. Maybe regenerating on the last standing position before jumping could be a solution. Also, the fetus ability feels a bit janky and buggy.

The shooting felt great, and the level design really made me appreciate it and search for every secret. The feeling of progression is one of the most engaging aspects.

I'm glad you enjoyed! Definitely going to work on the platforming stuff since that's the biggest criticism so far c:> 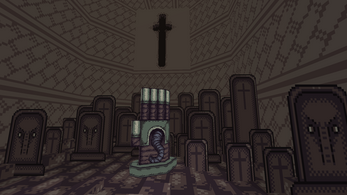 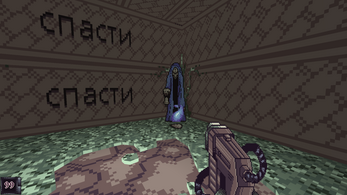 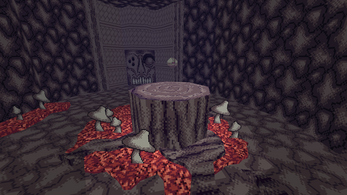 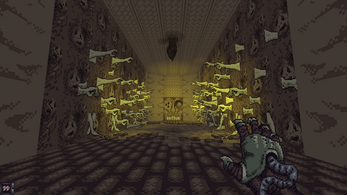 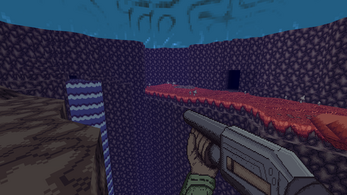 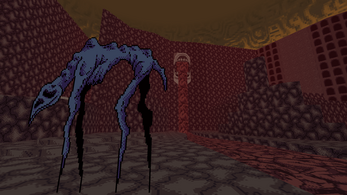